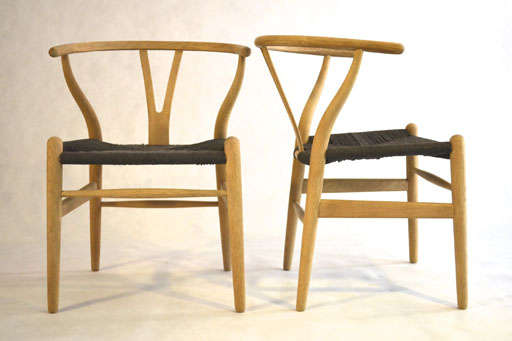 Superstitious or not, the wishbone is a symbol of good luck in many countries; and it has certainly proved to be a symbol of good luck for much-loved Danish designer Hans Wegner (1914-2007) who applied the form for his aptly named and highly successful Wishbone Chair (1949), also known as CH24.

However, for Wegner the success of his Wishbone Chair was more than just luck; rather it was the result of his dedicated skill, craftsmanship, and desire to create functional chairs – chairs he deemed “beautiful from all sides and angles” – as he drew from the simple silhouettes and graceful curvatures of ancient Chinese chairs.

Wegner’s Wishbone Chair is one in a series of chairs inspired by portraits of Danish merchants seated in ceremonial chairs hailing from the Ming Dynasty. Scandinavian designers, influenced by the study of Chinese furniture as well as English stylistic interpretations – think Queen Anne and Chippendale – adopted structural elements of traditional Chinese chairs such as the continuous back rail, yoke back, and stepped stretchers. They looked particularly at chairs from the Ming period as they expressed an uncomplicated but elegant silhouette of straight lines and basic curves.

Ming craftsmen kept ornamentation to a minimum as the grain of the wood contributed much to the beauty of the chairs and. Huanghuali – part of the rosewood family – became available during the Ming period as the ban on maritime trade was intermittently lifted. Huanghuali allowed craftsmen to create chairs with slender proportions and elements. This unadorned simplicity of the chair proved to be especially appealing to the elites during the Ming era – and as it turned out, the Danes in the mid-twentieth century.

Round Back Chair from the Ming Dynasty.

Wegner developed his affinity for design and craftsmanship as a teenager, working as an apprentice to a master cabinetmaker. At 20, he joined the military before attending technical college, the Danish School of Arts & Crafts and the Architectural Academy in Copenhagen. In Copenhagen, Wegner saw the possibilities of what could be produced through the intimate relationship of design and craftsmanship and he pursued further studies at the Royal Danish Academy of Fine Arts, The School of Design with the aim of producing and selling his furniture. Over the span of his lifetime, Wegner designed more than 500 different chairs – a fifth of which were put into mass production – and he captured international acclaim for his sculptured, organic aesthetic.

The Round Back armchair – also known as the Basket Back or U-Back armchair – is one of the most recognisable chairs from the Ming period. The back and armrests form a continuous horizontal rail that culminates in outward curving hand rests. Inspired by this chair and the freedom of movement it allowed sitters, Wegner designed the China Chair in 1943, produced by Fritz Hansen. In typical Wegner style, he simplified the form to its purest construction, stripping it of traditional ornamentation and eliminating superfluous elements. Wegner returned to the form of the Chinese Round Back chair in 1949, reimagining it once more for his Wishbone Chair. 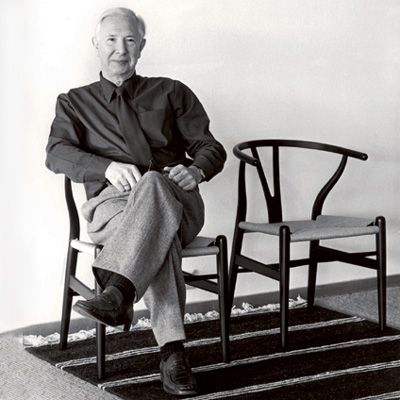 Wegner designed the Wishbone Chair as the first collaboration between Wegner and Carl Hansen & Sons, which has produced it continuously since 1950. An expression of simplicity and graphic beauty, it is most recognisable for its distinctive Y-shaped yoke back. The chair has sinuous front legs while its back legs are steam-bent in such a way they create a curve that tapers both upwards and outwards to meet and support the rounded back rail.

In a show of dedication to craftsmanship, Wegner moved to the Danish island of Funen where Carl Hansen’s family lived so that he could supervise and monitor all stages of production first-hand. Each individual chair had to meet Wegner’s meticulous demands including the smell of the wood, the feeling of the curvature of the back rest, and the inspection of the final sanding. It took Carl Hansen & Sons’ craftsmen three weeks to prepare and assemble each Wishbone chair, comprised of fourteen parts and 120 metres of paper cord. For more detail on the production of the Wishbone Chair, check at this post at Design Milk.

As Christian Holmstead Olesen, Head of Exhibitions and Collections at Designmuseum Denmark stated, Wegner’s Wishbone chair proves “that it is possible to create something truly groundbreaking by studying tradition. In fact, that is the only way to design something that extends far beyond its own time.”

Due to the relentless heat and our (so much more ...

Stunning pair of armchairs by #liceuarteseoficios ...

#vamptbyronbay shot of the day featuring the ...

One of the jewels of the Eternity Design ...

More like a work of art or sculpture - this ...

Did you decide which was your favourite setting? ...

You may think it’s strange to want to show an ...

You will be hard pressed to find another sideboard...

The Rodeio Chair by Jean Gillon. A strong, ...