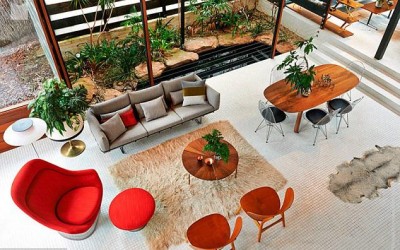 Vampt Vintage has been working closely with Marcus Lloyd-Jones, Principal and founder of Modern House Real Estate in Sydney’s Northern Beaches, to style some of Modern Houses’, well, modern houses. Modern House is a leading real estate agent of modern architecture. Like the team at Vampt, Marcus is inspired by, passionate about, and an advocate of the preservation of mid-century design. Every house his company represents is beaming with architectural merit, be it an original mid-century home, a creative adaptation by a now-renowned architect, or the contemporary work of an architect whose star is rising. For Marcus, an architect-designed home is a wise investment, in the same way that Vampt values genuine vintage furniture as a sound investment. Both are built to go the distance, and both are carefully crafted and designed to enhance the life of its users and their surroundings. So, if architecture and design are about how they make us feel, you can be sure that you’ll have feelings when you walk into any of Modern Houses’ homes styled with Vampt Vintage... END_OF_DOCUMENT_TOKEN_TO_BE_REPLACED 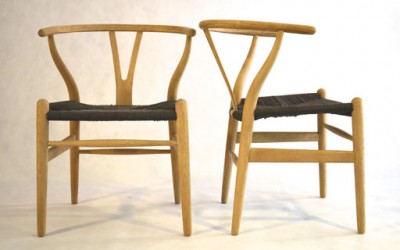 Wishbone Chair (1949) or CH24. Designed by Hans Wegner. Produced by Carl Hansen & Sons. Superstitious or not, the wishbone is a symbol of good luck in many countries; and it has certainly proved to be a symbol of good luck for much-loved Danish designer Hans Wegner (1914-2007) who applied the form for his aptly named and highly successful Wishbone Chair (1949), also known as CH24. However, for Wegner the success of his Wishbone Chair was more than just luck; rather it was the result of his dedicated skill, craftsmanship, and desire to create functional chairs – chairs he deemed “beautiful from all sides and angles” – as he drew from the simple silhouettes and graceful curvatures of ancient Chinese chairs. How Chinese tradition influenced Danish tradition Wegner’s Wishbone Chair is one in a series of chairs inspired by portraits of Danish merchants seated in ceremonial chairs hailing from the Ming Dynasty. Scandinavian designers, influenced by the study of Chinese furniture as well as English stylistic interpretations – think Queen Anne and Chippendale – adopted structural elements of traditional Chinese chairs such as the continuous back rail, yoke back, and stepped stretchers. They looked particularly at chairs from the Ming period as they expressed an uncomplicated but elegant silhouette of straight lines and basic curves. Ming craftsmen kept ornamentation to a minimum as the grain of the wood contributed much to the beauty of the chairs and. Huanghuali – part of the rosewood family – became available during the Ming period as the ban on maritime trade was intermittently lifted. Huanghuali allowed craftsmen to create chairs with slender proportions... END_OF_DOCUMENT_TOKEN_TO_BE_REPLACED

Latest from the blog